No, it’s not just about burning things. You might imagine people wearing masks, black clothes, and throwing Molotov cocktails. Anarchism, practiced with critical thought, is more complex (and arguably less climactic than that). And while at times those things might be part of anarchist practice, they are just the tip of the iceberg, and are only done for certain reasons and through certain interpretations. For example, I’m an anarchist, and I’m more likely to hold a community dinner than get confrontational with the police. It doesn’t mean it doesn’t happen sometimes (see my strike guide!), but there’s also a lot more to what I do and what I believe.

Anarchism is defined differently in several places. You might have heard the familiar refrain “No gods, no masters.” Most strains of anarchism are anti-hierarchical as a rule, meaning they oppose domination and superiority of all forms. This translates to a strong anti-government sentiment that, oddly, puts them very close to Libertarians on the political spectrum. After that, schools of thought may diverge. Some support the autonomy of anyone to do anything so long as it is not hurting anyone else. However, the Anarchist Library admits, “Every conceivable anarchy would need social pressure to dissuade people from acting coercively; and to prevent a person from acting coercively is to limit that person’s choices.” This tends to lead to some theoretical disagreements about the means involved to achieve or create anarchy, but ultimately, true anarchy has yet to exist, and so these worries about social pressures or lack thereof are less pressing in our current time.

There is actually quite a rabbit hole of all the different types of anarchist orientations out there. What I tend to believe in can sometimes be characterized as anarcho-communism. My beliefs generally center on the need for humans to cooperate with and care for one another, rather than dominate or subjugate each other. However, what I most enjoy about anarchism is not the beliefs and theory behind it, but rather that it gives people practices to bring about a new and better world.

Basic anti-hierarchical, consensus-based, community-caring principals inspire many organizations and individuals today. When I dig into anarchist movements, I see some really amazing and creative forms of activism happening. Community centers and organizations grounded in anarchism, like Santa Cruz’s own SubRosa Project, provide safe community spaces for music, art, community organizing projects, and people of marginalized identities (especially queers, at SubRosa!). Spaces like these, sometimes also called DIY spaces, are all over the U.S. and the world, many of them based on anarchist principals. Spaces like these are creating community and also helping create and/or rediscover alternative cultural practices to unhealthy mainstream monoculture.

SubRosa, for example, hosts community music and art events, queer dance parties, swap meets, discussion groups on witchcraft and politics, and serves as a meeting place for several community organizing projects. A related organization, The Fabrica, hosts workshops, events, and provides access to sewing machines and materials on a donation basis. Projects like these in Santa Cruz are the tip of the iceberg. The DIY/Anarchist subculture exists all over, in numerous iterations. Community co-ops, witchcraft covens, farms and gardens, housing co-ops, libraries of things, and organizing collectives like these are gifting the world new cultural practices based in emphasizing sharing, community care, accessibility, and responsibility. 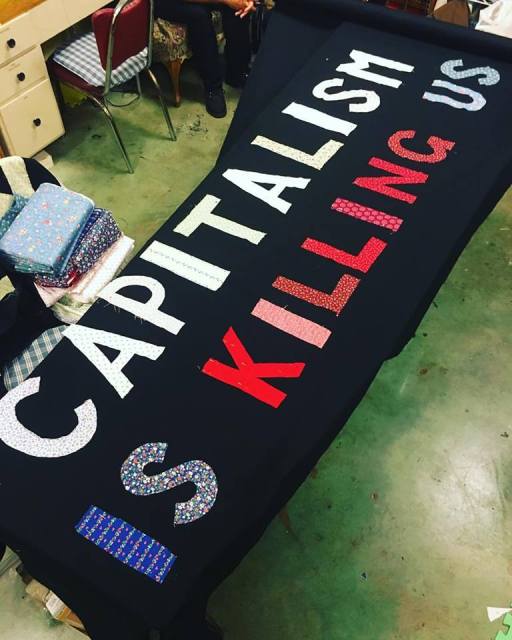 Spaces like these and anarchist culture in general deeply inspire my own practice. The creative measures that anarchists use to fund projects and initiatives, like donation-basis, notaflof (no one turned away for lack of funds), and group funding processes (for a really interesting example, check out this one!), elevate accessibility and promote individual generosity. Focus on the people, artists, and skills in one’s community gives me an alternative to buying into the mainstream monoculture’s media and practices, while also helping to create a locally-based cultural alternative. The beliefs I support in my de-powering capitalism article are profoundly anarchist. Anarchism provides a roadmap for the way forward in these challenging and perilous times. As Grace Lee Boggs puts it, we must create movements in our local communities which “not only say ‘No’ to the existing power structure but also empower our constituencies to embrace the power within each of us to create the world anew.”I believe anarchism is doing just that in a very real way, through the community-oriented initiatives it inspires.

My only critique of anarchist spaces is that, in my experiences both here in the Bay Area and in Missouri, many of the people involved were white. Though I can’t make a generalizing statement about the racial identity of the movement as a whole, my partner and I often lament that POC can sometimes seem to be left out of our local anarchist scene. Though there is some excellent anarchist anti-racist organizing going on, sometimes even these movements still center white folks over people of color.  This is a huge issue. For a group of people who profess to be anti-dominance, actively discouraging racism in our movement is of paramount importance, and I actively try to move this forward in my own practice of anarchism.

Anarchism as a practice and school of thought is diverse and still to be perfected. I embrace it because I find it has valuable teachings to incorporate into the world I wish to see. What are your thoughts on anarchism? If you have any, send me a message or comment below, I’d love to engage with you. For further reading, I’d recommend perusing these two databases of anarchist organizations and community spaces, and “Anarchy is Boring” by Brendan Kiley.

With love and anarchy,

Did you like reading that? Wonderful. I’d be ever so grateful if you’d consider supporting my writing so you can read more of it! There are a few ways you can support my blog and help me get my message out. You can DONATE via Paypal to help me pay for toilet paper and such, and you can LIKE on Facebook and also share this post with people in your life, especially people who think anarchy is just about wearing black! Maybe it ain’t 😉